He Had Roses in His Heart – a community play for Caunton, 2005

I’m currently reading Richard Sennett’s 1977 book ‘The Fall of Public Man’, a fascinating account and theory of the move from man as a social actor to that of a psychological entity, as he/she moves through the eighteenth century to the present day in the specific milieus of Paris and London.

It’s not an easy read but it is a provocative and stimulating one. At heart Sennett (and I am only half way through) appears to be saying that there is a constant interplay between the public and the private, and that for public man to exist – and by this he means (I think) a mode of discourse in which the individual and the personal are hidden in the background so that the encounter between strangers is free and uninhibited – a whole range of factors need to be brought into play.

For Sennett the great cities of London and Paris, and the fact that these grew at a huge rate in the eighteenth century as people who did not know each other arrived to make their fortune, was the perfect setting to witness the forms of social interaction that were created to allow these places to function, and for meaning to be created amongst this ‘gathering of strangers’.

Throughout the book he refers to the idea of theatrum mundi, the idea going back to the ancient Greeks that all the world really is a stage. This allows him to also analyse what is happening on the public stage during his period of investigation, and to draw conclusions about what this means for his argument. In the mid nineteenth century for example he suggests that the fashion for accurate historical interpretation in costume and set so that ‘what you see on the stage is what the person really is’, is in contrast to the vanishing visual clues that are now a part of city life due to the mass production of cheaper clothes, and also a desire from most individuals to ‘hide’ themselves because of a growing belief in the link between the external and the internal; the fact that your character can be read and interpreted by external clues and that therefore you are constantly in danger of involuntarily revealing yourself.

During this period, ‘(I)n the city, society must depend on art to end mystification, to tell a truth which men and women can otherwise arrive at by an often faulty process of deduction from miniaturised clues. That is to say, the relation between the audience and this art form began to be one of dependence. The theatre was doing for them that which in the modern capital they could not easily do for themselves’.

This has got me thinking a little about the community play. Of course all theatre is, to some extent, like all good art, a way of communicating and revealing a truth that may be slightly out of view and difficult to otherwise pull into focus. But the community play, and community art (as opposed to participatory art which may have no real interest in the social or the communal at all, but simply continue to dig ever deeper into our current ideology of the primacy of the individual) may be doing this very thing that Sennett mentions here – it may be doing for a community, and for the individuals within that community, something that cannot be otherwise done. It may be an act of revelation which cannot be arrived at or communicated in any other form. And this revelation is one that allows the community to be glimpsed, to be perhaps understood, to be more easily entered into.

Of course there is the fact of the community play’s existence, the production process, which plays a part; a community is revealed when it becomes clear that for an objective to be undertaken that collective action is required. But this needn’t be a play. It could be a jumble sale or a darts tournament or a karaoke night. The community play is one in which a representation of a community – past or present (and always because of the fact that it is performed by the living it is a mixture of the two, unless the subject matter is the here and now or an imagined future) – is laid out before an audience, who may or may not be strangers.

Which is why the community play is such a fragile and important form of theatre. And why the writer has to be incredibly sensitive to the specific codes of meaning that exist within the community in which they are working. The audience may be looking at the play for clues as to what it means to be a member of the community in which they live. For those who are new to this community they may be hoping to discover an idea of the traditions and rituals, the social forms and the specificities of language which will help them to enter into this new social arena.

They may in fact be thirsting for this, wanting to find the unique in this local, wanting to discover rules which will allow them, as Sennett’s public man is allowed, to converse and engage freely and uninhibitedly with their new social world. For those who have been in this community for a long time, or throughout their whole life, they may be looking for a play that encapsulates and communicates the unspoken rules that have been established, so that they can continue, so that communal interaction can be at its most healthy and vigorous.

Sennett asks at one point in his book, what a public actor is, and suggests that it is someone whose identity ‘is the meeting point between who a person wants to be and what the world allows him to be. Neither circumstance nor desire alone, it is one’s place in a landscape formed by the intersection of circumstance and desire’. It seems to me that this is a good definition of a community play, because in just about all of those that I have read there is both a historical understanding of the identity of the community (they are defined as a community of shipbuilders or farmworkers or post war families looking for new homes etc.) and also an idealised notion at play of what this community represents, whatever its specific makeup. And this idealised notion is often represented in the gradual move towards a more collective sense of identity throughout the narrative as a (usually) small society made up of many competing forces find themselves facing a challenge that requires them to engage with each other in a more public sense.

This does not mean that at the end of these plays that the community has somehow evolved into some new form where internal tensions have been eradicated; for these internal tensions are inevitable. The local, after all, can never be isolated from the historical forces that surround it. But it does mean that the individuals within these plays – and there are almost always one or two individuals who make a journey of discovery in the potential power of community throughout the narrative – realise that through engaging with the public world that surrounds them that their private lives are also transformed in some small way. 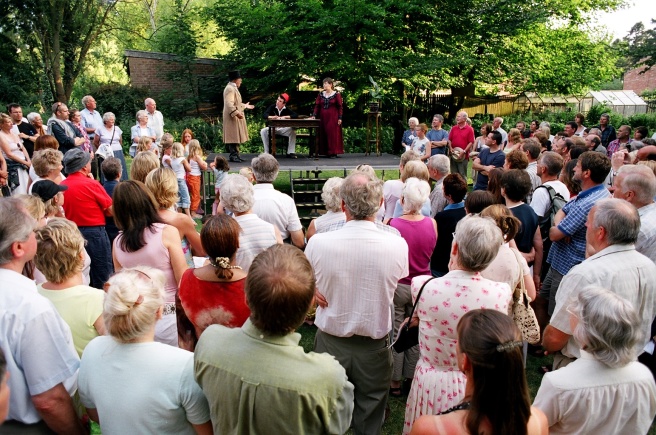 The initiation into Caunton continues

Some years ago Excavate (then Hanby and Barrett) produced a community play for the small village of Caunton in North Nottinghamshire as part of a series of four community plays in four neighbouring villages over four weeks, produced in partnership with New Perspectives (‘The Festival of The Beck’). One of the performers suggested that the play be performed every few years as it would give incoming families a chance to learn something of the village, and that it would be a ‘welcoming thing to do’. I think that what he meant was that this would in some way act as a form of initiation into the village, that through either taking part in or in watching the show that these newcomers would be given an imagined version of ‘Caunton’ that all could relate to and refer to and which, through being made concrete, would perhaps allow for public and social interaction to be more easily facilitated. That a model had been created which could act as an ongoing tool for social engagement. This village was one in which there was already a reasonably large amount of communal activity taking place, with many varied ways to engage with others on offer. But it was this play that the performer settled on as the most effective way of opening up the social world of the community to the stranger.

The community play then, in presenting an easy to see portrait of the public world of the local community, and in the journeys that characters make as they move to a better understanding of their role as social creatures, would seem to offer a useful guide to the interplay between the personal and the communal and through doing so a way into reconnecting with the idea of the public man.